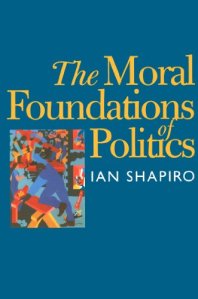 Ian Shapiro’s The Moral Foundations of Politics is a book I first read in 2012 but have revisited many times since. There are benefits to reviewing a book after the first read, while it is fresh and new in the mind. But there are also benefits to reviewing a book after giving it time to settle, a few years even in this case. I first discovered Shapiro through his Open Yale course of the same name. This review will basically apply to that course as well. And the Yale course makes for a good (and free) audiobook version even though it’s not identical.

Shapiro sets out to ask and answer the most foundational question of political philosophy: “When do governments merit our allegiance, and when should they be denied it? This most enduring of political dilemmas motivates our inquiry.” His inquiry proceeds historically, though not always chronologically, from the Age of Enlightenment to the present day. The Enlightenment is the backdrop of the for the whole book. The project passes through three major conceptual stages:

Shapiro defines the Enlightenment thinking as a “faith in the power of human reason to understand the true nature of our circumstances and ourselves.” This is what he calls the early Enlightenment, later distinguished from the mature Enlightenment. The Enlightenment is exceptionally optimistic about the possibility of reason and science to answer all natural and human questions. A comprehensive and rational understanding of the world and man will enable man to design systems of good government from first principles. It will not be necessary to rely on tradition, religion, or preference for one’s ethnic group. Through reason, the solutions of the Enlightenment will be universal and independent of cultural, religious, or ethnic particularities.Shapiro includes as part of the Enlightenment systems of thought as diverse as social contract theory, utilitarianism, and Marxism.

The social contract thinkers discussed in the book include John Locke, Thomas Hobbes, Jean-Jacques Rousseau, John Rawls, and Robert Nozick. Shapiro frames the foundations of  early social contract in natural law and what he calls the “workmanship ideal”. This workmanship ideal has a theological basis in God’s creation of the world. Shapiro argues that as social contract theories and other Enlightenment theories move away from the theological foundations of Locke’s theory they have a challenge to ground their theories in some other way.

Marxism might seem an odd theory to include in the Enlightenment along with social contract theory and utilitarianism. But Shapiro argues that it has a similar motivation to create a system of political organization through rational and scientific principles. Marx thought himself to be very scientific in his approach, focusing exclusively on material factors in his theory of history. That his theories are largely regarded today as pseudoscience does not change the fact that they aspired to be scientific.

In a very interesting chapter Shapiro reviews many of the challenges to Enlightenment thought in thinkers like Edmund Burke, Alasdair MacIntyre, Richard Rorty, Jean-François Lyotard, Michael Sandel, and Michael Walzer. All are quite diverse but have a common distrust in the confidence of the Enlightenment to provide a foundation for all philosophical and political questions. And on this point they are quite right. The early Enlightenment was vulnerable in its own outsized ambition.

In After Virtue Alasdair MacIntyre worked his way backward in time from the interminable and irresolvable moral and political disputes of the present to their roots in the Enlightenment. In a chapter titled Why the Enlightenment Project of Justying Morality Had to Fail MacIntyre analyzes the theoretical difficulties of attempts by Kant and Hume to justify moral values while prescinding from any sort of tradition or narrative. MacIntyre argues that the failure of the Enlightenment project leads to the irrationality of Kierkegaard and Nietzsche.

Shapiro does not deny that the Anti-Enlightenment critiques have merit. But he does argue that they go too far: “Rorty and other postmodernists move too quickly from this compelling critique of the early Enlightenment obsession with foundational certainty to the wholesale abandonment of the idea that science can and should aspire to get at the truth more reliably than opinion, convention, superstition, or tradition. Under the strong influence of the later writings of Ludwig Wittgenstein, Rorty embraces his idea that truth is nothing more than adherence to the rules of a language game—the norms and conventions we have come to accept. So Rorty defines truth in terms of social consensus and ‘solidarity’ and rationality as ‘civility’—the result of conversational agreement.”

Rather than abandon the scientific outlook tout court Shapiro follows another path toward what he calls the mature Enlightenment and democracy. The scientific outlook of this mature Enlightenment is a fallibilistic science: “This rests on an inherently critical stance toward all putative knowledge claims. It involves recognizing that although the best evidence may suggest that x is the case, there is always the chance that we are wrong, and that, if future research proves that we are, then this will be because the world operates different from how we think presently. Science advances, on this view, not by making knowledge more certain but by producing more knowledge. That knowledge-claims are recognized always to be corrigible is a mark of science’s superiority to opinion, convention, superstition, and tradition, not its equivalence to them.”

This difference, the introduction of fallibilism, addresses one of the critiques from Anti-Enlightenment which is most poignant to modern minds, the danger of authoritarian hyper-confidence. I like the way Shapiro put this in one of his Yale course lectures:

“Many years ago when I was teaching this course, before I had written Democratic Justice, and indeed one of the events that caused me to write it was a question from a student in the class. I had been teaching Rawls and I had gone through the principles, the difference principle and all of that, and I had explained that Rawls was the most influential political philosopher of his generation, and that this theory of justice had completely revolutionized modern political philosophy. And this student put up their hand and said, ‘Professor Shapiro, now that Rawls’s theory has been established, why hasn’t The Constitution been changed to include it?’ and many of the students in the class laughed. And they laughed why? Does anyone have a guess? Why do you think people laughed? It seemed like a naïve question, why though? John Rawls got the answer, so our Constitution doesn’t reflect that answer, why haven’t they changed it?… So let’s suppose it’s true that Rawls got the right answer, and Nozick didn’t, and Dworkin didn’t, and Shapiro didn’t. Rawls got the right answer. He solved the problem. Why don’t we just implement it? This was, after all, what Bentham thought. Bentham thought he’d figured it all out and he went running around the world with his constitutions and was deeply disappointed when countries wouldn’t adopt them. Why do we resist this idea?”

In the Twentieth Century such uncompromising and confident implementation did occur many times, though it was more Marx’s  rather than Rawls’s system that was implemented. And the effects were disastrous. The mature Enlightenment is tempered against such extremism:

“If there are indisputable right answers to questions concerning how the state should be organized and what policies it should pursue, then it makes sense to give political power to those who know the answers, be they philosopher kings, utilitarian calculators, or ideological leaders of a revolutionary working class party. By contrast, although the mature Enlightenment view of science does not go all the way with the postmodern critique, it differs from early Enlightenment views in recognizing that knowledge claims are invariably corrigible and subject to revision. Moreover, from the perspective of the mature Enlightenment we are bound to recognize that enduring differences of value and interest mean that in politics there will always be people with incentives to misrepresent and obscure the truth. As a result, partisans of the mature Enlightenment have good reasons for skepticism of all forms of political vanguardism.”

In view of the fallibilism of the mature Enlightenment the superior path is not the implementation of any of the systems derived from first principles but rather democracy. The key notion of democracy according to Shapiro is that “governments are legitimate when those who are affected by decisions play an appropriate role in making them.” The values of science and rationality are not absent under democracy but neither are they supreme. Rather they are used as tools in the democratic processes and indeed should be used in that process. Shapiro’s review of democratic theory includes the work of James Madison, Joseph Schumpeter, and Alexis de Tocqueville. He also review classical theories or Plato and Aristotle, which presented important challenges to democracy.

What distinguishes the democratic views of Rorty and Shapiro is the place of science and reason. Though written in 2003 The Moral Foundations of Politics has special relevance after 2016. In a time when tribalism, ethnic conflict, racial tension, censorial political correctness, and general illiberalism seem to be asserted in many corners the need for a return to Enlightenment principles is all the more urgent. There may seem to be some plausibility today to the notion that truth is nothing more than an assertion of power. But giving in to this notion would be a mistake. Rationality is still the best path forward. Shapiro’s book makes that important case well.