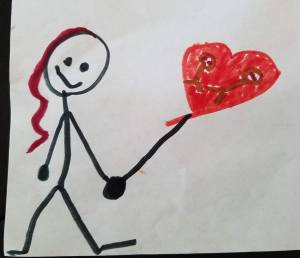 Anna went to a restaurant with her Mommy. They had chicken sandwiches and milkshakes. And best of all, she got a big, red, shiny balloon in the shape of a heart. She was so excited to get a balloon. They were her favorite. She loved the way they floated and bounced around. But there was something really special about this balloon. There were two little people floating inside it. The people at the restaurant told her about the little people but she thought that they were joking. That would be so silly. How could there be people inside a balloon?

They walked outside the restaurant and to the car. Anna held on really tight to the balloon. She didn’t want it to float away.

When they got home she ran inside pulling her balloon by its string. The balloon floated up to the ceiling. But she wanted to pop it. So she pulled it back down by the string. Then she got a tooth pick from the kitchen. It was one of the toothpicks that Mommy and Daddy used to check the bread when they were cooking to make sure it was done. But today it was going to be used to pop a balloon.

Anna couldn’t believe her eyes. There really were two little people inside this balloon. The little people were frightened and they started to run away. But Anna chased them and picked them quickly. And then she carried them over to her box and threw them inside. Anna was just a little girl and she was still a little rough with animals and toys. So she was a little rough with little people too. But she did make a window on the side of the box so the little people could see outside. But she covered the window with glass panes so that they couldn’t get out even though they could see through them.

Anna’s mommy saw her over by the box and asked, “What do you have there Anna?” “Oh, nothing,” said Anna. But Mommy came over to see anyway. And she peaked through the window and saw the two little people. “Oh my goodness!” said Mommy. “Where did those two little people come from?” Then she remembered what they had said at the restaurant about the balloon. “Oh, there really were two little people in that balloon. Anna, did you pop it?”

Anna just shrugged her shoulders and said nothing. But Mommy looked around the room and saw little pieces of balloon. She picked them up and put them back together and saw that it was the balloon from the restaurant. She also saw her toothpick from the kitchen. “Ah, you did pop the balloon, Silly.” Anna was embarrassed but Mommy told her, “It’s OK, you didn’t know that there were people in there. But let’s see if we can make them more comfortable.”

Mommy went over to the box and propped up the cardboard top into a triangle to make a roof. Then she cut out some more pieces to make a door and more windows. Then she said, “It’s OK, little people. You can come out and in whenever you want. This is you’re home now.” The little people said nothing. They were still very shy. But they were happy to be in this home inside a bigger home with people who seemed pretty nice. Even if the little girl was a little rough.